Maybe you’re a few years into owning your TV and suddenly find that your Bush TV won’t turn on. Nothing seems to work, so what do you do?

Maybe your Bush TV won’t turn on but a red light is on, or maybe your Bush TV is stuck on standby, but whatever the exact issue, you should look at the same set of causes and solutions to fix your problem.

This Bush TV troubleshooting guide covers every one of these possible fixes for your Bush TV not turning on, and will give you the know-how to sort this out yourself without having to resort to an expensive replacement or repair service.

If your Bush TV won’t turn on, fix it by checking your TV is receiving power and that all cables are firmly connected, then reset it by unplugging your TV, holding the power button down for 15 seconds, then plugging your TV back in after waiting a further 2 minutes.

There can be a handful of reasons why your Bush TV is not turning on, which we will cover in-depth below.

Although this might seem a basic step, power cycling your TV is often the best way to fix your Bush TV not turning on.

To reset your Bush TV:

Most people will now have their TV fixed and back up and running, but if your Bush TV won’t turn on after resetting, then we’ve got a few more basic fixes to try before getting into the hardware fixes.

3. Does Your Bush TV Remote Work?

4. Are There Knots in Your Power Cord?

5. Are Your HDMI Cables Properly Connected?

If your Bush TV is not turning on but the standby light is on, then the issue is likely to be a more serious one: either a main board / power board failure or a backlight failure.

One of the most common failure points on a Bush TV is the backlight.

Backlight failure is most likely if you Bush TV is not turning on but the standby light is on.

You can also take a look at the video below to see how to replace your Bush TV’s backlights.

It goes without saying that if your TV is under one year old, then you should contact Bush customer support to get it replaced under warranty.

Even if Bush won’t fix your TV, they might still offer you a discount off a future model if you pester them hard enough! This is always worth a try in my experience.

To wrap up, if your Bush TV is not turning on, then to fix it you can:

Before going down this path though, try Bush customer support one last time, and if nothing else, they might well offer you a discount off a new model.

LG TV not turning on See SmugMug example websites to get an idea of how powerful SmugMug is as a... Read More 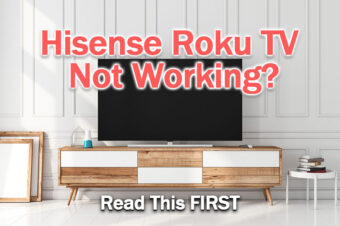 Is your Hisense Roku TV not working? Read this first to get every proven method... Read More Take a look at the best lenses for Canon Rebel T6 for new photographers and... Read More If your Samsung TV won't turn on, then you need this guide to help you... Read More