Among Wacom’s many drawing tablets, there are two models without screens that particularly stand out: the Wacom Intuos Pro and Wacom Intuos.

This article quickly compares the Intuos vs Intuos Pro, covering the key differences and similarities that you find in real-world use. This article does not concentrate on manufacturer’s specifications, but on the actual points that matter to you when using a drawing tablet.

There’s a quick summary below of which tablet is best suited for which type of user, followed by full details of why each tablet might be the best for you.

The Wacom Intuos is for those on a budget who want a drawing tablet to use occasionally.

The pen and drawing feel are very close to the Intuos Pro, but miss out of a few key features that professionals will want. But, the Intuos is very easy to use and has a very high build quality.

The Wacom Intuos Pro is best suited to professional photo editors / artists who use their tablet every day, and those who rely on keyboard shortcuts.

With the most customizable buttons of any Wacom tablet, and the ability to add texture sheets to change the surface feel of the drawing pad, the Intuos Pro series offers the best pen pressure sensitivity and accuracy that Wacom provides. I use an Intuos Pro for my photo editing.

Compare the One by Wacom to the Intuos

Compare the Cintiq to the Intuos

See the best drawing tablet under $100

The following quick comparison, followed by a full explanation of all the differences should help your decide between the Wacom Intuos or Intuos Pro. Personally, I would recommend the Pro model if you are serious about your photo editing or art, although the standard Intuos makes an excellent beginner drawing tablet.

The Drawing Tablet I Use

With the highest level of pen sensitivity currently on the market, and widely considered to be the tablet that most accurately mimics pen and paper, the Intuos Pro is my top pick of any screenless drawing tablet. It beats the standard Intuos with the texture of its drawing surface, the excellent Pro Pen 2, and the express keys and particularly the very useful dial. The Wacom Intuos Pro is the model I use in both Lightroom and Photoshop for my photography, and unlike some other users, I have not found pen nib wear to be an issue at all. This really is invaluable in creating photos like these, and is the tablet I most frequently turn to – this has stood the test of time.

The Intuos has a much more premium feel than you would expect from the relatively low price, with greater pen accuracy, Bluetooth for an easy wireless connection, and excellent performance when compared to other tablets at its price point. This will likely last you for years without breaking or needing replacement, which probably can’t be said for cheaper tablets, with the only real negative for beginners being that the button position means you must reach over your drawing hand to use them. The pen, although good, does not have the sensitivity or accuracy of the Pro Pen 2 on the Intuos Pro, and the drawing surface is less textured, but for the price, this drawing tablet is ideally suited to most home users and those starting out with their art or drawing.

Key Differences Between the Intuos and Intuos Pro

What are the differences between the drawing tablets in detail?

What is the same between the tablets?

What Differences Between the Wacom Intuos vs Pro Matter in the Real World?

There are obviously quite a few differences between the Wacom Intuos vs Pro, but which are the really important ones in practice?

I use programmable buttons extensively in my own workflows, and find it a massive time saver to be able to assign keyboard shortcuts to buttons. The Wacom software will allow you to assign the same button different functions in each program you open, which is very handy.

Because of the placement of the buttons, and the radial dial, the Intuos Pro beats the standard Intuos on this metric. The radial dial is particularly useful to make all those qualitative adjustments like changing brush size that we constantly seem to do, and can be assigned to four separate settings per application, selected by clicking the central button in the dial.

Although the differing levels of pressure sensitivity are something that you are unlikely to notice in practice, you will notice the lack of tilt support on the standard Intuos.

When drawing on paper, you will know that tilting your pen produces a different stroke, with a different thickness and flow. This is impossible to replicate on the Intuos, but works very well on the Intuos Pro.

Again, the Intuos does not support any input other than the pen, while the Intuos Pro also allows you to make gestures with your fingers.

There is excellent palm rejection on the Pro, which disregards your hand when it detects the pen nib near the surface of the tablet, but having the ability to assign extra keyboard shortcuts by tapping a different number of fingers, or zooming into an image by pinching is incredibly useful.

The Intuos is by far the smaller, more portable tablet, and is much better suited to being carried around away from home. Although the small Intuos Pro is still portable, it is noticeably larger than the Intuos, with approximately the same drawing area.

The one area where the Intuos Pro excels is with the Intuos Pro medium and in particular with the large size, with a tablet that although is more suited for permanent desk work, lets you use your shoulder for drawing, rather than your wrist. This is healthier for you long term, and is a more natural way to draw.

Compare the One by Wacom to the Intuos

Compare the Cintiq to the Intuos

See the best drawing tablet under $100 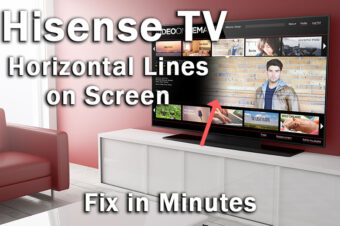 Fix Hisense TV horizontal lines on screen with this complete guide to get your Hisense... Read More